They’ve Got the Bug: Bio Lab Research at RIC

Enter any one of the bio labs at Rhode Island College and you’ll find students shrugging on lab coats, propping themselves on stools and peering into high-powered microscopes. The key work of a laboratory is the scientific experiments and the data they produce. These students seem to know that they are the innovators of the future. ​​​

“At some colleges, research students are thought of as worker bees,” said Professor and Chair of Biology Rebeka Merson. “That’s not what we have here at Rhode Island College. Our research students become collaborators. They’re learning concepts that a lot of students don’t learn until they’re in graduate school. By teaching them advanced-level concepts, we give them a better start when they leave; and when they go off into the world, they do things that really surpass our abilities.” 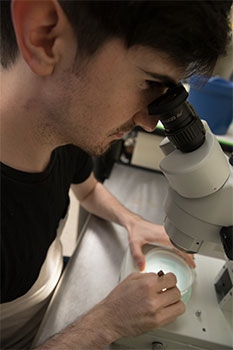 As early as freshman year, students can begin lab research and many stay on until their senior year, completing their senior thesis with their PI (principal investigator), a faculty mentor. Though a thesis is advised and guided by the PI, focus is on showcasing what the student has learned. And at Rhode Island College​, there’s a lot of research to showcase.

In this final article in our​ five-part series, we look at the research being done in the Merson lab and the work being prepared for in two new labs – the Maia lab and the Toorie lab.

Merson, an evolutionary biologist and environmental toxicologist, is studying how animals adapt to polluted environments. Her model organism is skates (marine animals related to rays and sharks). Working in her lab within that framework is graduate student Cybele Collins, who is examining the microbiome that live in the guts of skates that feed in polluted waters.

“Microbiome are a collection of microorganisms, mostly bacteria, that live in our gut,” Collins explained. “They’re one of the earliest forms of life and some of the most diverse organisms on earth. They’re actually older than humans. They’​re our ancestors.”

At least 100 trillion microbiome live in and on the human body. Scientists say the human body contains 10 times more microbial cells than human cells and our genes are outnumbered by microbial genes 100 to one. It’s enough to give you the heebie jeebies. ​​

While some microbes are harmful (such as the bacteria that killed off half of the European population during the bubonic plague) most bacteria are harmless and essential for our health. Microbial populations not only help us digest food, Collins explained, they are the first line of defense against germs and other invaders. They either fight the invaders – or eat them, protecting their territory while protecting our health.

“Because bacteria will even eat chemicals,” Collins said, “​environmental scientists have used bacteria to clean up oil spills. Bacteria will eat pollution. The question is ‘What is the effect on microbes that consistently eat pollution?’” Finding the answer to​ that question is the focus of her research project.

Collins begins by removing the contents from the guts of skates in order to identify the microbial species that live there. Because microbes are so tiny, Collins can only identify them by extracting their DNA. A computer program is able to match DNA sequences with specific known microbes; however there are many microorganisms that remain unknown.

Currently, Collins is poring through 25 million sequences of DNA, using computational methods to sort out the data points. After narrowing her selection down to a few hundred thousand DNA sequences, she will begin to examine what the microbes eat and the effects on the microorganism.

“Ultimately, what happens to skates when they feed in polluted environments is happening to us,” Collins said.​

A former graphic designer, Collins became interested in biology after taking a biology course. “I thought I would just learn a little bit about biology for my illustrations,” she said, “but I came to love communicating science through teaching.”​ After earning her master’s degree, Collins intends to continue in the field of research and, perhaps, to teach.​

New to the department this year is biomechanicist and anatomist Anabela Maia, an assistant professor of biology. Maia is examining how muscle and skeletal elements work together to propel sharks and other fish through the water. In her research, she uses high speed video cameras and electrodes to measure the muscle signals in sharks and other fish while they swim. She also adds small particles to the water and then illuminates the sharks with a laser sheet, which allows her to see how the water flows over the shark as it swims and how sharks and other fish use their varied-shaped fins to locomote. Maia hopes to find new bioinspiration from fish that can be applied to medical devices and improvements in the efficiency of underwater vehicles.

Physiologist Anika Toorie, assistant professor of biology, is also new to the department this year. Toorie is investigating metabolic diseases (i.e., obesity, type-2 diabetes) and their correlation with early-life stress drug abuse or environmental stressors. Both are ongoing public health issues across the United States and developed nations. Her research focuses on mechanisms that are disrupted in the brain as a consequence of chronic exposure to high fat and high sugar (obesogenic) diets and how specific areas of the brain that promote overconsumption of obesogenic diets might be correlated to susceptibility to opioid abuse.

“All of the faculty in our department understand that our students are invaluable because not only are they helping us along with our research but we were in their position once,” said Assistant Professor of Biology Dan Hewins. “I would say this is especially true of the recent faculty. Most of us are relatively young in our career and we still remember very vividly what it was like to be an undergraduate and graduate student working in a lab. I started out cleaning fish tanks in the lab as a second semester freshman. It took me about a year before I was actually in a lab measuring something that was meaningful to my PI. After catching the research bug, I never looked back.”

RIC’s Department of Biology offers numerous opportunities for laboratory research, led by experts in their field like Patterson. Students benefit from experiential learning, they gain advanced-level lab skills that give them an edge when applying to ​grad school or med school and they gain invaluable communication skills in writing and presenting their research findings at science conferences.​